The One Wiki to Rule Them All
Register
Don't have an account?
Sign In
Advertisement
in: Armies

View source
watch 01:55
Cobra Kai Season 4 - The Loop
Do you like this video?
Play Sound

The Galadhrim warriors served as the defense forces of Lothlórien. They were elite Elven troops who protected the capital city of Caras Galadhon, likely using weapons of a better quality than those of the Wardens who watched the realm's borders.

In the films, the Galadhrim are led by Haldir. In Peter Jackson's The Lord of the Rings: The Two Towers, Galadriel and Celeborn persuaded Elrond that the Men of Rohan, and the race of Men in general, should not be abandoned in their hour of need. With Elrond's permission, Haldir rallied a force of four hundred Elves of Lothlórien to join him, and together they marched to Helm's Deep bearing the banners of their Lady Galadriel, arriving just ahead of Saruman's approaching Uruk-hai army. They were armed with two handed Elven swords, longbows of the Galadhrim and high quality armor and robes.

The Elves' involvement in the defense of the fortress proved critical in delaying the enemy, as their superior archery and sword skills enabled them to defend the Deeping Wall for a long time. Otherwise, the Rohirrim did not have sufficient manpower to cover all of the Hornburg's fortifications and hold out long enough, being forced to supplant their ranks with boys and old men. The Elves' sacrifice bought enough time for Gandalf, Éomer and the two thousand mounted Rohirrim horsemen to arrive and turn the tide of the battle.

Most of them, including Haldir, fell in combat further into the night.

In J.R.R. Tolkien's books, Lórien could not spare any forces to help the other kingdoms against Sauron. Lórien barely survived three assaults from Dol Guldur, and so this move of the Elves did not happen. 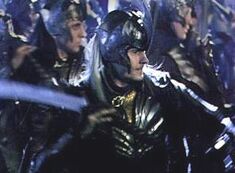 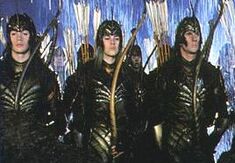 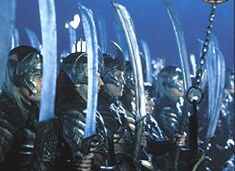 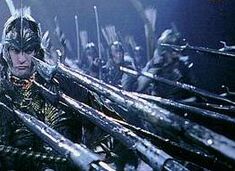 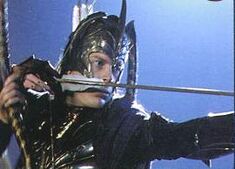 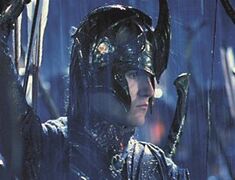 A Galadhrim warrior at Helm's Deep
Community content is available under CC-BY-SA unless otherwise noted.
Advertisement