Peter Jackson's The Lord of the Rings trilogy

Born before SA 3430, Fereveldir was among many Elves that supported the Men and fought in the Last Alliance of Elves and Men against Sauron and his dark forces near the end of the Second Age. After Isildur, son of Elendil, cut the One Ring from Sauron's hand and avenging his father's death, Fereveldir was able to take cover when the Dark Lord exploded, leaving behind the Ring which was claimed by Isildur. After the war was over, Fereveldir lived in Lothlórien throughout the Third Age, never realizing that Isildur's refusal to destroy the Ring allowed Sauron's spirit to endure and ensured that he would remain a threat to Middle-earth for years to come.

During the War of the Ring, Fereveldir, along with father and brother, accompanied Haldir and a large group of Galadhrim Warriors to aid King Theoden and his people to reinforce the defence of Helm's Deep from Saruman's army. Stationed on the Deeping Wall, Fereveldir was seen standing next to Legolas (son of Thranduil) and Gimli (son of Gloin), looking onwards at the arrival of 10,000 Uruk-hai. At the sound of Aragorn, Fereveldir loaded his bow and fired at a number of Uruk-hai that were charging towards the fortress. Fereveldir was among the many defenders that fought during the Battle of Helm's Deep. He and the Elves demonstrated their unmatched proficiency of archery, as they loosened devastating hails of arrows in seconds, killing many Uruk-hai. Since it never shows him being killed, it is possible that he was one of the elves that survived the battle when Gandalf and Éomer arrived with reinforcements. It is unknown he sailed west to the Undying Lands in the West or stayed in Middle-earth during the early years of the Fourth Age. His fate is not known.[1] 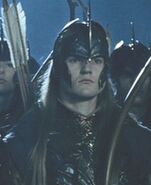 Retrieved from "https://lotr.fandom.com/wiki/Fereveldir?oldid=167614"
Community content is available under CC-BY-SA unless otherwise noted.