The One Wiki to Rule Them All
Register
Don't have an account?
Sign In
Advertisement
in: Half-elven, Elf friends, Númenóreans,
and 6 more
English

View source
watch 01:36
We're Getting Mutants in the MCU - The Loop
Do you like this video?
Play Sound

Half-elven (chose to be mortal)

Elros, also known as Elros Tar-Minyatur, the Half-elven, was the son of Eärendil and Elwing, brother of Elrond, uncle of Elladan and Elrohir and Arwen Undómiel, and the first King of Númenor; ancestor to a line of kings that led to his distant descendant Aragorn II Elessar. He had a strong friendship with the Elves, who were half his kin. 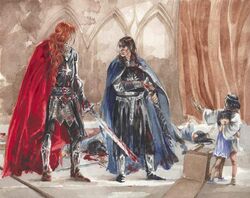 In FA 532, Elros was born in the Elven havens of Arvernien. When they were only children, the Sons of Fëanor attacked the havens in order to recover the Silmaril, and Elros and Elrond were taken captive by Maglor and Maedhros. Around the same time, Elwing, their mother, cast herself into the great sea and vanished from Middle-earth.[2]

From then on, Elros and his brother were raised by Maglor. They were both raised in love for Maglor was not proud of his deeds. It is nowhere told when or if Elros and Elrond actually left Maglor or if they participated in the War of Wrath which broke the power of Morgoth for good.

Eventually the War of Wrath ended. As Elros and Elrond were Peredhil, or Half-elven, and only in these two remained the line of heroic chieftains of Men in the First Age. The Valar gave to Elrond and Elros the choice of which kindred they would belong to. Elros chose to be of Man-kind and as such he was granted a great life-span. Eönwë came among the faithful humans and he taught them and gave them wisdom, power, and a life longer than any others of mortal race, but none of the high men ever reached the age of Elros. A great land was prepared for them; not a part of Middle-earth yet not wholly separate from it. This land was Númenor, and Elros would be its first king.[3]

Númenor was raised from the depths of the sea by Ossë, established by Aulë and enriched by Yavanna. The Elves came bringing flowers and fountains out of Tol Eressëa from Avallonë, and wrought gardens in Númenor. The Valar called it Andor, "The Land of Gift", and its own people called it Westernessë, for it lay west of all the lands inhabited by mortals.[3]

At age 90, Elros ascended the throne of Númenor in the city of Armenelos where he was inscribed as Elros Tar-Minyatur. The sword Aranrúth, which once was his great-great-grandfather Thingol's sword, the Ring of Barahir, and Dramborleg, the Axe of Tuor, became heirlooms of the Kings of Númenor.[4] During his reign, Elros had four children to an unnamed mortal wife. They included three sons, Vardamir Nólimon, Manwendil, and Atanalcar, and a daughter, Tindómiel.[5]

Tar-Minyatur was a Quenya word that meant "High First-ruler" in the High-Elven tongue,[10] from tar ("king"), minya ("first") and túrë ("master, lord").[11] Afterwards this was the convention by which most succeeding Kings of Númenor took their royal title.

In earlier versions, the Adûnaic name for Elros was Indilzar Azrabelo, and later changed to Gimilzôr. Later, the name Gimilzôr was given to the twenty-third King of Númenor.[12]

The marriages between Elves and Men are in bold.
The Half-elven or the Peredhil are in italic.