The One Wiki to Rule Them All
Register
Don't have an account?
Sign In
Advertisement
in: Elves of Rivendell, Sindarin words, Half-elven,
and 4 more
English

View source
watch 01:36
We're Getting Mutants in the MCU - The Loop
Do you like this video?
Play Sound

Sam and Matt Kennard (Born of Hope)
Elladan and Elrohir were the twin sons of Elrond the Half-elven and Celebrían of Rivendell, and were noted for their close friendship and cooperation with the Dúnedain of the North, Rangers of the North, and Men in general, and for their deeds during the War of the Ring.

Elladan and Elrohir were born in TA 130,[5] and had a younger sister, Arwen. Through their mother Celebrían, they were the only grandsons of Lady Galadriel and Lord Celeborn of Lothlórien.

In TA 2509, the brothers rescued their mother from her imprisonment by Orcs. Although she was physically healed by Elrond, after fear and torment from the Orcs she lost all joy from Middle-earth, and so she departed for the Undying Lands the next year. Due to this, the twins harbored great hatred for Orcs.[6]

By the year TA 2933, Elladan and Elrohir went riding against Orcs with Arathorn II, the father of Aragorn II Elessar. There Arathorn was slain and his wife and son went to dwell in Imladris, where Elrond received Aragorn as his foster-son, naming him Estel.[7]

When the Fellowship of the Ring formed in Rivendell, the twins' role was to scout the lands and prepare the way for the Fellowship.[8] Later, they traveled along with Halbarad and the Grey Company. They delivered a message from their father concerning the Paths of the Dead and accompanied Aragorn, Legolas and Gimli there. Elladan traveled behind the company, the Dead following after him.[9] They battled on the Fields of Pelennor "with stars bound to their brows."[10]

During the Last Debate, Elladan and Elrohir seconded Gandalf's decision to throw a force at the Morannon, saying that Elrond had sent them with that same counsel from Rivendell.[11] Elladan and Elrohir then accompanied Aragorn and fought alongside him at the Battle of the Black Gate.

After the war, Elladan and Elrohir met the escort of Arwen in Lothlórien, and together, they traveled to Minas Tirith.[12] The brothers arrived first and carried a banner of silver. They were followed by Glorfindel and Erestor.[13]

Fourth Age and beyond

When their father departed to the West, the brothers stayed in Rivendell for a while. In time, their grandfather Celeborn came to live with them before journeying to the Grey Havens.[14] It is unknown whether Elladan and Elrohir chose to remain in Middle-earth as mortal men or depart with the last of their kindred to Valinor.

The name Elladan is Sindarin for "Elf-Man" or "Elf-Dúnadan," referring to his dual descent from both Elves and Edain (a name given to those descending from the three houses of Men from Beleriand).[15] It comes from the words el ("elf or star") and adan, singular of Edain.[16] On the other hand, Elrohir means "Elf-knight", but rochir also means "horse-lord".[17]

Though Tolkien never specifically states that Elrohir and Elladan were twins, it is suspected that they were for four reasons: first, they are described as "So much alike were they, the sons of Elrond, that few could tell them apart: dark-haired, grey-eyed, and their faces elven-fair, clad alike in bright mail beneath cloaks of silver-grey" (Tolkien 761).[18] Secondly, one is rarely mentioned without the other, and their names are only separated when they are speaking. Thirdly, they were both born in the same year,[5] and elven pregnancies last a full year.[note 1] Fourthly, the birth of twins was not a rare occurrence in their family history (Amrod and Amras, Eluréd and Elurín, Elrond and Elros).

The brethren were friends and companions-in-arms of the Rangers of the North, and helped defend the remnants of Arnor from evil after the fall of the North-kingdom. They held a special grudge against Orcs because of their mother's suffering at their hands.

Like their sister, father, and uncle, they could make a choice between mortality and immortality, expressed by whether they would follow their father to Valinor at the time of his own departure at the end of the Third Age. Since they are explicitly described as remaining in Rivendell for a time after their father's departure, some fans speculated that they had also chosen mortality. However, J.R.R. Tolkien himself noted that the twins were allowed to "delay" their choices.[19]

The marriages between Elves and Men are in bold.
The Half-elven or the Peredhil are in italic.

In early writings, Elladan and Elrohir were named Elboron and Elbereth. These were the same early names for the twins Eluréd and Elurín, who were the uncles of Elrond.[20] They also had a younger sister named Finduilas.

When they arrive at the citadel, Elrohir and Elladan go after the leader of the dark forces here in Fornost, also the main villain of the game, Agandaûr. They are seen dueling him atop the citadel. The duel is finished after Eradan, Andriel, and Farin arrive - after killing some of Agandaûr's Orcs and his chieftain Tharzog - forcing Agandaûr to retreat on a fell beast. The Great Eagle Beleram goes after Agandaûr, who loses the Eagle by creating a storm with his dark sorcery. With their job done in Fornost, Elladan and Elrohir return to Rivendell, while the other three go back to Sarn Ford, and Beleram goes back to report to Gwaihir the Eagle-lord.

The two are seen again in Rivendell, and can be spoken to. They later join the forces of the Grey Company under Halbarad, and like Luin, are not seen in the game again. 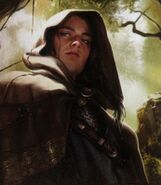 Elladan from The Lord of the Rings: The Card Game - The Road the Rivendell Adventure Pack 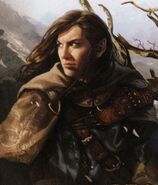 Elrohir from The Lord of the Rings: The Card Game - The Redhorn Gate Adventure Pack 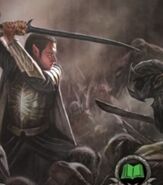 Elladan from The Lord of the Rings: The Card Game - The Mountain of Fire Expansion Pack 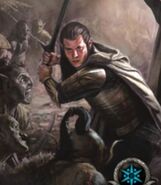 Elrohir from The Lord of the Rings: The Card Game - The Mountain of Fire Expansion Pack