Before the creation of Arda

Slightly larger and taller than a Man (book), 20 feet (movie)

"I am a servant of the Secret Fire, wielder of the flame of Anor. You cannot pass. The dark fire will not avail you, flame of Udûn. Go back to the Shadow! You shall not pass!"
—Gandalf, The Fellowship of the Ring, "The Bridge of Khazad-dûm"

Durin's Bane refers to the Balrog of Morgoth that fled following Morgoth's defeat during the War of Wrath to live and slumber deep within the depths of the Dwarven kingdom of Moria during the Third Age. Although its true name and history are largely unknown, it became an important figure during the War of the Ring, eventually being awakened by the Dwarves of Moria, wreaking destruction upon those who stood against it and forcing the survivors to abandon the kingdom. Moria was left to the Balrog and became known as a place of darkness and fear for hundreds of years, and it was not until the Fellowship of the Ring passed through Moria and inadvertently awakened the Balrog that it was finally slain in a great duel with the wizard Gandalf.

Durin's Bane was one of the Maiar spirits that existed before the creation of the world (of the same order as Gandalf and Saruman), who descended into Arda with the Valar. It was eventually seduced and corrupted by Melkor, becoming one of the Valaraukar and joining with the other Balrogs in Morgoth's service. The Balrog fought in many battles of the War of the Jewels, up to and including the War of Wrath. It somehow managed to survive Morgoth's defeat, fleeing east and taking refuge beneath the Misty Mountains.

For more than five thousand years, the Balrog lay dormant at the roots of Barazinbar. It remained undisturbed throughout the Second Age and most of the Third Age, until the miners of Dwarf-King Durin VI awoke it when they mined too deeply and too greedily in their search for mithril. The Balrog slew Durin, and was thereafter known as Durin's Bane.

The Dwarves attempted to fight the Balrog, but its power was far too great. Despite their efforts to hold Khazad-dûm against it, King Náin and many of the Dwarves were killed, and the survivors were forced to flee. News of the disaster reached the Silvan Elves of Lothlórien, who called the Balrog the Nameless Terror (not knowing its true nature at the time), and who began to refer to Khazad-dûm as Moria (dark abyss).

For five hundred years, Moria was left to the Balrog. Sauron began to put his plans for war into effect around the year TA 2480 of the Third Age, and sent Orcs and Trolls to the Misty Mountains to bar all of the passes. Some of these creatures came to Moria, where they stayed in uneasy alliance with the Balrog, which they feared.[1]

Tolkien did not clarify whether Sauron was aware of the Balrog's presence prior to this time, and thus the full extent of their alliance remains unclear.

The Balrog had a small but important role at the Battle of Azanulbizar, the climactic battle in the War of the Dwarves and Orcs. In TA 2799, the Dwarves finally defeated the majority of the Orcs occupying Moria, but Dáin II Ironfoot, having slain the Orc Azog, felt the terror of the Balrog at the gate and declared that Moria itself remained beyond their power to conquer. Despite an attempt to recolonise Moria by Balin in TA 2989, Durin's Bane remained a menace in the ancient kingdom of the Dwarves, its true nature hidden to the outside world.

The Balrog ignited its whole body in flames, then attacked with its flaming sword, which Gandalf destroyed with his own sword Glamdring. The Balrog ignited its body a second time, then took out its red-hot whip and swung it about. Gandalf then smote the Bridge before him with his staff. The staff broke asunder, a blinding sheet of white flame sprang up, and the bridge cracked at the feet of the Balrog, who fell forward into the abyss. As the Balrog fell, it swung its whip. The thongs of the whip wrapped around Gandalf's legs, dragging him over the edge with the Balrog.

As they fell, the Balrog's flames burned Gandalf. After the long fall, the two landed in a subterranean lake, which Gandalf later said almost froze his heart. The water quenched the Balrog's fire, reducing it to "a thing of slime, stronger than a strangling snake". In this relatively weak state, Durin's Bane fled, and Gandalf pursued the creature out of Moria and up the Endless Stair. The chase ended atop the peak of Zirakzigil, or Celebdil, when the Balrog's bodily flames were renewed, restoring much of its power. There, beginning on January 23, the Maiar fought what was later known as the Battle of the Peak. After a fierce battle, Gandalf prevailed and finally slew the Balrog, casting it down from the peak and sending it crashing into the mountains destroying the Endless Stair. Then Gandalf died but "was sent back – for a brief time, until my task is done." The great eagle Gwaihir the Windlord (lord of the Great Eagles of Middle-earth) found him and carried him to Lothlórien where he was healed and clothed in white – he had become Gandalf the White.

The ultimate fate of Durin's Bane is not known, as only its physical form died, as with all Maiar when they were "killed," but what happened to the spirit of the Balrog was not revealed. It is also unknown if it was the last of its kind, or if there were other Balrogs who managed to escape the War of Wrath and remained hidden in long forgotten places.[2][3]

Durin's Bane appears in Ralph Bakshi's animated film, and follows Tolkien's description in that it is bigger than a man, but not huge. However, its appearance has been mocked by reviewers, noting that it appears to have wings similar to a butterfly, appears to have fuzzy feet, has the head of a lion-like creature, and roars repeatedly. After its fall into the chasm of Khazad-dûm, it changes into a half snake, half demon-like creature.

Peter Jackson's The Fellowship of the Ring

The Balrog was also portrayed in Peter Jackson's live-action film trilogy, where it was a large, black creature covered in flame. Although Tolkien described it as being taller than a man, Durin's Bane in the film was much larger than a man, at least twenty feet or so. Rather than having a voice of any kind, when it roared, it sounded similar to an erupting volcano - the vaporous presence of heat emanating as its breath. Its weapons, rather than physical in nature, were completely comprised of flame, taking the form of a sword first and a whip second. More than its use of obliteration, it was flames that were its key weapon of choice against Gandalf. The fight between the two plays out very much like the version in the book; Gandalf shatters the Balrog's fiery sword (using a magical shield in conjunction with Glamdring), and then breaks the bridge of Khazad-dûm. As the Balrog falls, its whip latches onto Gandalf's legs and drags him into the abyss.

The Balrog appears in a few flashbacks in The Two Towers. The first flashback shows the events that take place following Gandalf's plunge into the abyss of Khazad-dûm: Gandalf hurtles down the chasm after the Balrog, eventually recovering his sword Glamdring and catching up to the Balrog. He and the Balrog attempt to kill each other as they continue to fall down the seemingly endless abyss, with Gandalf managing to land several blows on the Balrog while it makes constant attempts to strike at Gandalf with its fists and claws. They fall for what seems like an eternity, until they at last crash violently into the underground lake, temporarily extinguishing the Balrog's flames.

The second flashback shows Gandalf and the Balrog now fighting atop Mt. Zirakzigil during a great storm, in which Gandalf manages to imbue his sword with electricity from a lightning strike and stabs the Balrog in the chest, mortally wounding it and causing it to fall dead from the peak and crash into the mountain side, its flames forever extinguished.

In The Fellowship of the Ring video game, Gandalf battles Durin's Bane in a two-stage boss battle at the end of Moria. After weakening the beast with his lightning bolts, Gandalf must battle it with his sword.

In The Lord of the Rings: The Battle for Middle-earth, the Balrog appears as a boss in the first level. The player is forced to fight the Balrog solely with Gandalf, using his Lightning Sword strike multiple times to kill it.

In the Evil mode, the Balrog can be summoned using its respective power. The Balrog can ignite its sword to cause additional melee damage, strike with its whip, roar to cause enemies to flee in terror, fly to certain areas, and most importantly, blast enemies and structures to ashes with its incinerate skill. The Balrog, not surprisingly, is deadly in melee.

The Balrog is both a boss and a playable hero in The Lord of the Rings: Conquest. In the Good campaign, the player must kill it to reclaim Moria from the Orcs, playing as Gandalf the white. In the Evil campaign, it appears twice: once to kill Gimli, and once to kill Treebeard. Its weapon in this game is a flaming sword and Fire Breath.

Durin's Bane appears in The Lord of the Rings: Tactics as an unique unit in the second mission of the game, armed with a sword of flame and fiery breath. In the Fellowship campaign, the player must get Aragorn, Gimli, Legolas, and Frodo across the Bridge of Khazad-dûm, fighting off goblins and using Gandalf to stall the Balrog. In the Mordor campaign, Durin's Bane is a playable unit which is being targeted by Gandalf, Aragorn, Boromir, and several Rangers of Ithilien; the player's goal is to defeat the enemy heroes before they can defeat the Balrog..

Two Balrogs also feature in The Lord of the Rings Online. The first one, called Thaurlach, was created for the purposes of the game, and is the last 'Boss' in the famous Rift Raid, a 12-player instance in the region of Angmar. The other Balrog, Durin's Bane, features in one of the introductory quests to the Mines of Moria expansion of the game; an illusionary copy of it can later be fought in the Fear Wing of the Ost Dunhoth raid.

The Balrog appears in LEGO The Lord of the Rings: The Video Game. While its fight against Gandalf remains the same as in the film, it belches at one point, causing Gandalf to wave the fumes away in disgust.

The Balrog is a main boss in the The Lord of the Rings: The Third Age, where it initially appears in a cut scene at the bottom of a mithril mine and is later fought on the bridge of Khazad-dûm where Gandalf becomes a temporary party member.

The confrontation scene in Peter Jackson's Fellowship of the Ring

Gandalf confronts the Balrog at The Bridge of Khazad-dûm

Last moments before the falls

Fall of the bridge

Gandalf confronts the Balrog at the Bridge of Khazad-dûm II

Gandalf confronts the Balrog at the Bridge of Khazad-dûm III 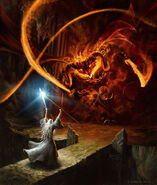 Gandalf confronts the Balrog at the Bridge of Khazad-dûm IV 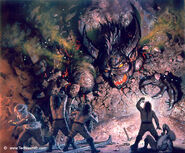 The Dwarves delve too deep 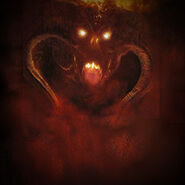 Durin's Bane in Lord of the Rings Online

Gandalf battles Durin's Bane atop the peaks and towers of Zirakzigil

The ruin of the Balrog, thrown down by Gandalf

The Balrog of Moria in the New line films

Evils in LEGO The Lord of the Rings: The Video Game
Add a photo to this gallery

Retrieved from "https://lotr.fandom.com/wiki/Durin%27s_Bane?oldid=167779"
Community content is available under CC-BY-SA unless otherwise noted.