The One Wiki to Rule Them All
Register
Don't have an account?
Sign In
Advertisement
in: Balrogs, Servants of Morgoth, Minor characters (The Lord of the Rings),
and 4 more
English

"You cannot pass. The dark fire will not avail you, flame of Udûn. Go back to the Shadow!"
—Gandalf confronting Durin's Bane on the Bridge of Khazad-dûm , The Lord of the Rings, The Fellowship of the Ring

Before the creation of Arda

Slightly larger and taller than a Man

"Durin's Bane" refers to the particular Balrog of Morgoth that had fled following the War of Wrath to sleep deep beneath the depths of the Dwarven kingdom of Khazad-dûm.

Although its true name and particular history are unknown, this Balrog eventually became an important figure during the War of the Ring after being awakened by the Dwarves of Khazad-dûm. It was not until the Fellowship of the Ring had passed through Moria and inadvertently reawakened the Balrog that it was finally slain in a great duel with the wizard Gandalf.

Years of the Trees and the First Age

Durin's Bane was one of the Maiar spirits that existed before the world was created (of the same race as Gandalf and Saruman), who descended into Arda with the Valar. It was eventually seduced and corrupted by Melkor, becoming one of the Valaraukar and joining with the other Balrogs in Morgoth's service. The Balrog likely fought in many battles of the War of the Jewels, up to and including the War of Wrath. It somehow managed to survive Morgoth's defeat, fleeing east and taking refuge beneath the Misty Mountains.

For more than five thousand years, the Balrog lay dormant at the roots of the Misty Mountains beneath the Dwarven kingdom of Khazad-dûm. It remained undisturbed throughout the Second Age and most of the Third Age, until the Dwarves awoke it in TA 1980 when they mined too deeply and too greedily in their search for mithril. It slew Durin VI that year, and his son Náin I attempted to destroy it a year later in TA 1981. He was also slain by the Balrog, after this the Dwarves of Durin's Folk abandoned their ancient home.

In TA 2799 after the Battle of Azanulbizar, Thráin II wished to re-enter Moria, but was stopped by Dáin Ironfoot, who alone had reached the threshold and saw the waiting Balrog.

In January of TA 3019, the Fellowship of the Ring traveled through Moria on their way to Mordor. There, they were attacked in the Chamber of Mazarbul by Orcs. The Fellowship fled through a side door, but when Gandalf, who was also a Maia, tried to place a "shutting spell" on the door to block the pursuit behind them, the Balrog entered the chamber on the other side and cast a counterspell. Gandalf spoke a word of command to stay the door, but the door shattered and the chamber collapsed.

The company fled with Gandalf, but the Orcs and the Balrog, taking a different route, caught up with them at the Bridge of Khazad-dûm. At the Bridge, Legolas instantly recognized it as a Balrog, and Gimli recognized it as Durin's Bane. Gandalf, the only one capable of battling it, then commanded the rest of the Fellowship to flee across the bridge, where he then stood, blocking the Balrog's way. The demon's flames then seemed to die, but its shadow increased before attacking with its flaming sword, which melted into red-hot liquid metal when it met Gandalf's own sword, Glamdring. The Balrog then leapt onto the bridge, brandishing its whip, and in response Gandalf smote the Bridge before him with his staff. The staff broke asunder, a blinding sheet of white flame springing up, and the bridge cracked at the feet of the Balrog, who fell forward into the abyss. But as the Balrog fell, it lashed out with its whip, catching Gandalf and dragging him over the edge and into the darkness below.[1]

After a long fall, the two crashed into a great subterranean lake, which Gandalf later said was as cold as the tide of death and almost froze his heart. The water quenched the Balrog's fire, reducing it to "a thing of slime, stronger than a strangling snake". Despite this relatively weak state, Durin's Bane renewed its attack on the wizard, and the two fought in the water, with the Balrog clutching at Gandalf to strangle him, and Gandalf hewing the Balrog with his sword, until finally the Balrog fled into ancient tunnels of unknown origin. There, Gandalf pursued the creature up the Endless Stair and onto Durin's Tower, where Gandalf finally prevailed in the Battle of the Peak and slew the Balrog, casting it down from the peak of Zirakzigil and sending it crashing onto the mountain side.

The ultimate fate of Durin's Bane is not known, as only its physical form died, as with all Maiar when they were "killed," but what happened to the spirit of the Balrog was not revealed. It is also unknown if it was the last of its kind, or if there were other Balrogs who managed to escape the War of Wrath and remained hidden in long forgotten places.[2]

The Balrog appears in Ralph Bakshi's animated The Lord of the Rings. It appears as a large humanoid with a lion's head and wings. Gandalf is the only one that seems to recognize it, and it does not appear until the Fellowship reaches the Bridge of Khazad-dûm.

The Balrog is also portrayed in Peter Jackson's The Lord of the Rings film trilogy, as a giant, black creature covered in flame. Although Tolkien described it as being taller than a man but not huge, Durin's Bane in the film is at least twenty feet tall. Rather than having a voice of any kind, when it roared, it sounded similar to an erupting volcano - the vaporous presence of heat emanating as its breath (the Balrog's roar was created by pulling a cinderblock across a plywood board and then digitally shifting the pitch of the resulting sound.) Unlike previous adaptations, the goblins are terrified, and run as it comes closer to the Fellowship. Its weapons, rather than physical in nature, were completely comprised of flame, taking the form of a sword first and a whip second. Its own flames were its key weapon of choice against Gandalf. Their duel progressed closely to how it does in the book: Gandalf shatters the Balrog's fiery sword (using a magical shield formed around himself in conjunction with Glamdring), and then strikes the bridge of Khazad-dûm, breaking it in half, and causing the Balrog to fall into the abyss. As the Balrog falls, its whip latches onto Gandalf's legs and drags him off of the bridge.

Aside from this, the Balrog had been briefly seen in a book owned by Saruman, beforehand, as the latter taunted Gandalf telepathically of the choice of the Fellowship taking the route of Moria, implying that Saruman was aware that it had awoken and brought woe to the Dwarves there.

The Balrog appears in a few flashbacks in The Lord of the Rings: The Two Towers. The first flashback shows the events that take place following Gandalf's plunge into the abyss of Khazad-dûm: Gandalf hurtles down the chasm after the Balrog, recovering his sword Glamdring in mid-air and catching up to the Balrog. He and the Balrog attempt to kill each other as they continue to fall down the abyss, with Gandalf managing to land several blows on the Balrog while it makes constant attempts to strike at Gandalf with its fists and claws. They fall for a few minutes, until they at last crash violently into the subterranean lake, temporarily extinguishing the Balrog's flames.

The second flashback shows Gandalf and the Balrog now dueling atop Mount Zirakzigil during a great storm, in which Gandalf manages to imbue his sword with electricity from a lightning strike and stabs the Balrog through the heart, mortally wounding it and causing it to fall from the peak and crash onto the mountain side, its flames extinguished.

In The Battle for Middle-earth and its sequel, Durin's Bane can be summon for 25 spell power by the Goblins and Mordor factions.

In The Lord of the Rings Online Durin's Bane appears during two Session Play encounters. A vision of him is also the boss of the Ost Dunhoth raid.

In The Lord of the Rings: Conquest Durin's Bane is resurrected by Sauron in Khazad-dûm; during the fourth mission of the evil campaign. As a boss-fight, the player gets the chance to play as Durin's Bane to kill Gimli. 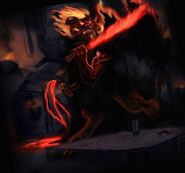 The terror of Moria 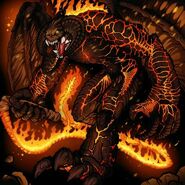 Gandalf fighting "a thing of slime" in Ralph Bakshi film (1978)

Durin's Bane from The Battle for Middle-earth

The Nameless Fear (Durin's Bane) from The Lord of the Rings: The Card Game, Khazad-dûm expansion

Durin's Bane from The Lord of the Rings: The Card Game, Shadow and Flame adventure pack 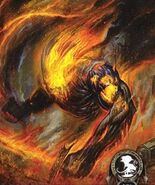 Durin's Bane from The Lord of the Rings: The Card Game, The Road Darkens expansion'