John Stephenson, in the 1977 Rankin/Bass version of 'The Hobbit'

Dori was a Dwarf of Durin's Folk, who, along with his brother Nori and cousin Ori,[1] travelled with Bilbo Baggins and Thorin Oakenshield as a member of Thorin's Company on the Quest for Erebor, to reclaim the Lonely Mountain from the dragon Smaug.

Dori was among the Dwarves at Bag End who joined in singing about "blunting the knives" and "bending the forks"; as well as accompanying by playing the flute. He was described as “decent fellow despite his grumbling”. He often wore a red-violet coat while on the Quest for Erebor. He was noted by Thorin to be the strongest of the thirteen companions.[2]

Before the Quest of Erebor, Dori lived in Thorin's Halls in the northern Blue Mountains with Nori and Ori. In TA 2941, the three became part of Thorin and Company, befriending Bilbo Baggins and traveling with him in search of Smaug's treasure at the Lonely Mountain.

It fell to Dori to carry Bilbo Baggins in the tunnels of the Misty Mountains during the escape from the Goblins, but Dori dropped Bilbo, and the other Dwarves and Gandalf blamed him for "losing their burglar." Later, during their escape from the Wargs and Orcs, Dori helped Bilbo climb a tree to get away from the wargs. Bilbo shortly thereafter saved Dori by grabbing his legs as they were rescued by the Great Eagles and taken to their eyrie from the Misty Mountains. When Gandalf tells their tale to the skin-changer Beorn and brings forward the company, Dori came first, along with Thorin.

Dori fought in and survived the Battle of Five Armies. He likely returned to the Lonely Mountain, where he survived up until the time of the Council of Elrond and the War of the Ring, most likely fighting in the Battle of Dale, though his exact death date is unknown.

In the The Hobbit film trilogy by Peter Jackson, Dori is played by Mark Hadlow.

The studio gave this description of the character in the trilogy:

"A distant relative of Thorin Oakenshield, Dori is the eldest amongst his brothers Ori and Nori. He is the strongest in The Company of Dwarves, and spends much of his time watching out for Ori, making sure he hasn’t caught a chill or gotten himself killed by Wargs or Goblins. Eternally pessimistic, with a natural tendency to expect the worst, Dori is nonetheless quite prepared to risk life and limb in order to get the job done."

In The Hobbit: An Unexpected Journey: A Visual Companion, writer Jude Fisher describes Dori as fancying himself as something of a sophisticate, with a liking for good wine, beautiful jewelry, and fine clothes; the rest of the company see him as a dandy, as shown by the way he braids his beard into a silver case. Yet he is still one of the most formidable fighters in the company with both his Dwarven sword and flail. After being caught by the wood elves in The Desolation of Smaug, Dori and the rest of the company are stripped of their weapons and he later receives a human longsword from the Lake-town armory.

Dori is shown often mothering his younger brother Ori in the films. It was said by Mark Hadlow that Nori drives him (the character Ori) mad. In The Hobbit: The Desolation of Smaug, as the Company entered Beorn's house, Dori tells Ori to stay away from the door, and then says: "It's not natural. None of it." This is the exact same quote as Samwise Gamgee said to Frodo Baggins after climbing down their Elvish rope in the beginning of the film adaptation of The Two Towers.

In Rankin/Bass' adaptation of The Hobbit, Dori is voiced by John Stephenson. In this version, Dori is one the few Dwarves to interact much with other characters and speak.

In The Hobbit (1968 radio series), Dori is voiced by Alexander John.

In 2003 video game, The Hobbit, Dori was shown as having a long brown beard without mustache.

In The Lord of the Rings Online, Dori was a non-playable character first met in the Blue Mountains. Sometime before the War of the Ring, he was one of the Dwarves who participated in Dwalin's expedition to the Dourhands' lands, south of Thorin's Halls. Two years later, he was overseeing a mining business in North Downs when he got caught up and had to be rescued.

In LEGO The Hobbit: The Video Game, he is in the Fall of Erebor level as a young Dwarf, to make the level playable for two players.

Dori as he appears in Peter Jackson's The Hobbit

Dori (right) as he appears in the animated movie

Close up of Dori's Sword 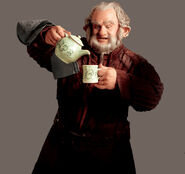 Dori and his tea 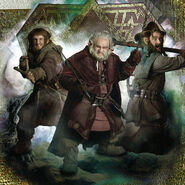 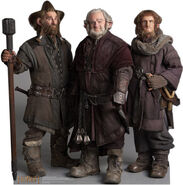 Dori as portrayed in The Lord of the Rings Online. 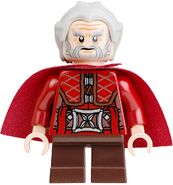 Retrieved from "https://lotr.fandom.com/wiki/Dori?oldid=262720"
Community content is available under CC-BY-SA unless otherwise noted.