The One Wiki to Rule Them All
Register
Don't have an account?
Sign In
Advertisement
in: Men of Gondor, Ruling Stewards of Gondor, The Lord of the Rings characters,
and 5 more
English

Men of Gondor (House of Húrin)

"Yet a Halfling still, and little love do I bear the name, since those accursed words came to trouble our counsels and drew away my son on the wild errand to his death. My Boromir! Now we have need of you. Faramir should have gone in his stead."
—Denethor, upon meeting Gandalf and Pippin Took in Minas Tirith[4]

Denethor II was the twenty-sixth and last Ruling Steward of Gondor, and father of War of the Ring heroes Boromir and Faramir.

Denethor was the third child and only son of Ecthelion II.[1] A proud and noble man, the blood of Númenor ran truer in him than it had in any man of Gondor for many years. He was described as subtle and often scornful and could perceive the thoughts of men, including those that dwelled far off. It was difficult to deceive him and dangerous to try.

He succeeded his father Ecthelion II as twenty-sixth Ruling Steward in TA 2984. During his stewardship, Gandalf was less welcome in Minas Tirith, and his counsels went unheeded.

In later life, Denethor secretly used a palantír to probe Sauron's strength, using it at the top of the White Tower in a secret chamber above the Throne room.[7] The effort aged him quickly, and although Sauron was not able to bend him to his will as he had Saruman, knowledge of the Dark Lord's overwhelming forces exacerbated the bitterness that had taken root at the time of the death of his wife.

Denethor was well aware that Sauron's assault on Gondor would come during his lifetime and prepared accordingly, even though he increasingly came to believe that the struggle would be hopeless. In TA 3018 when Sauron attacked Osgiliath, he found the strength and preparedness of Denethor greater than he had expected or feared. Minas Tirith was fully provisioned for a siege and as war loomed Denethor sent away from the city the old, the women and children and had the Warning beacons of Gondor lit, dispatching errand riders with the Red Arrow to Théoden of Rohan to summon aid.

The death of Boromir, his eldest and favorite son, and the siege and apparent doom of Gondor drove Denethor further along the path of despair. Following this news and the passage of Frodo Baggins through Ithilien he became estranged from Faramir, though Faramir still upheld his father's wishes.[5] Denethor therefore dispatched Faramir with reinforcements to command the garrison at Osgiliath and following the battle there and at the Causeway Forts, sent out a cavalry sortie under the command of Prince Imrahil to rescue his son's retreat. However Faramir returned severely wounded, breaking Denethor's spirit.

Looking into the palantír, Sauron was able to drive him mad with despair, giving him a hopeless vision of an approaching black fleet from the south, portending that Gondor would fall to Sauron thanks to the Corsairs of Umbar coming to assist in the Siege. Sauron, however, obscured the vision's finer details to hide that those ships would in fact be under the command of Gondor's erstwhile king, Aragorn, who ousted the Corsairs at Pelargir and come by ship to relieve the city. Denethor therefore believed that further resistance was futile, although he remained steadfast in his rejection of the shadow.

He committed suicide on March 15, TA 3019, having ordered his men to erect a pyre for him and Faramir in the Hallows of Minas Tirith. He threw a torch onto the pyre, then broke the white rod of his office over his knee and cast it into the flames, symbolizing the end of his stewardship and the rule of the Stewards. He laid himself down on the table and so perished, clasping the palantír in his hands. His attempt to take the grievously injured and apparently dying Faramir with him was thwarted by the timely intervention of Beregond and ultimately, by Gandalf.[3]

Denethor II ruled as the Steward of Gondor for 35 years, from TA 2984 until his death in TA 3019. The title of Steward was passed to his son, Faramir, who also became the first of the Princes of Ithilien.[8] After his death the Anor-stone would only show Denethor's hands slowly withering in flame, unless the viewer had great strength of will to turn it to other visions.

Denethor had been the name of the tenth Ruling Steward of Gondor, who, in turn, was named after a king of the Nandorin Elves.

The name comes from the Nandorin words dene ("strong, lithe") and thara ("tall, slender"), and gives the name a meaning of "Lithe and lank".[9]

Denethor was voiced by William Conrad in the 1980 Rankin/Bass animated adaptation of The Return of the King.

"You may triumph on the field of battle for a day, but against the power that has risen in the East, there is no victory."
—Denethor, to Gandalf[12]

In Peter Jackson's movie trilogy, Denethor is portrayed by John Noble. In a significant change from the novels, he is depicted as an incompetent leader driven to insanity by despair. He appears in the extended edition of The Two Towers and is a major character in The Return of the King.

Denethor appears in one extended flashback scene in The Two Towers, arriving at Osgiliath as it is liberated by Boromir's troops. He congratulates his elder son while disparaging the younger Faramir, and commands Boromir to travel to the Council of Elrond, take the One Ring, and return it to Gondor.

In The Return of the King, Denethor is depicted as overcome with despair, convinced that Sauron cannot be opposed. He denies Aragorn's birthright to the throne of Gondor, refuses to light the beacons to call Rohan for aid and, after Osgiliath is captured by Mordor's forces, sends Faramir and his men on a suicide mission to retake the ruined city. When Faramir is brought back to Minas Tirith unconscious, Denethor hastily concludes that his last son is dead and commands his guards to build a funeral pyre for the both of them, ignoring Pippin's insistence that Faramir is still alive. As Sauron's armies attack Minas Tirith, Denethor prepares to immolate himself alongside Faramir; only Pippin and Gandalf's intervention saves Faramir's life. As he sees Faramir start to awaken, Denethor, now engulfed in flames, throws himself off of the pinnacle of Minas Tirith.

The palantír of Minas Tirith, which causes Denethor's corruption in the novels, is only hinted at in the extended edition of The Return of the King.

In The Lord of the Rings Online, Denethor has two sisters, Terenis and Vanyalos, the wife of Lord Forlong. His role in the game is relatively minor, as by the time the player reaches Minas Tirith, Faramir already lies wounded while the Steward's will is failing. 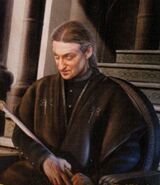 Denethor in The Lord of the Rings: The Card Game 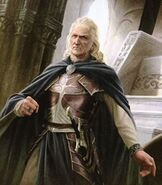 Denethor in The Lord of the Rings: The Card Game - Flight of the Stormcaller Adventure Pack 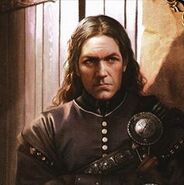 Denethor in The Lord of the Rings: The Card Game - Encounter at Amon Dîn Adventure Pack