The One Wiki to Rule Them All
Register
Don't have an account?
Sign In
Advertisement
in: Galadhrim, Cleanup, Sindarin words,
and 9 more
English

Uncertain; possibly Years of the Trees

Sailed to Valinor in the early Fourth Age

Celeborn was the Lord of Lothlórien, and the husband of Galadriel, Lady of the Golden Wood. He was said to be one of the wisest Elves in Middle-earth at the end of the Third Age.

During the War of the Ring, Celeborn defended Lothlórien and led the assault on Dol Guldur. He remained in Middle-earth for a time at the beginning of the Fourth Age, but eventually joined his wife in the Undying Lands.

Around FA 52, Galadriel came to Doriath. Galadriel was one of the Ñoldor who came to Middle-earth wishing to see the lands and rule a realm of her own. She came with the second host of Elves from Aman with Fingolfin and Finrod.[note 2] Celeborn and Galadriel fell in love and married.

It is not clear how long Celeborn and Galadriel dwelled in Beleriand. According to one story, they left Beleriand and crossed the Blue Mountains into Eriador before the Fall of Nargothrond in FA 495, but according to another story they remained in Beleriand until the end of the First Age.

Around FA 502, King Thingol of Doriath summoned Dwarf craftsmen to set a Silmaril in the Nauglamír, the fabled jeweled necklace of the Dwarves. The Dwarf craftsmen coveted the necklace and especially the Silmaril, and they demanded that Thingol give it to them. When Thingol refused, they killed him and took the necklace and Silmaril. The Dwarven craftsmen were pursued by Elves of Doriath, who killed the Dwarves and retrieved the necklace. However, two Dwarves escaped and returned to Nogrod in the Blue Mountains and rallied their kinsmen to seek vengeance on the Elves of Doriath. An army of Dwarves attacked Doriath and defeated the Elves. They took the necklace once more, but Beren again reclaimed it at the Battle of Sarn Athrad.

Doriath was briefly re-inhabited by Beren's son Dior Eluchíl, but the Sons of Fëanor came to try to take the Silmaril in the Second Sack of Doriath. Though Dior's daughter Elwing escaped with the Silmaril, Dior was killed and Doriath was ruined and abandoned.

Celeborn's distrust of Dwarves began at this time. His role in these events is unknown, although in one account it is written that Celeborn escaped the sack of Doriath.

The First Age ended with the War of Wrath and the defeat of Morgoth. Beleriand was ruined and sank beneath the Sea. Many of the Ñoldor returned to the Undying Lands with the pardon of the Valar, but Galadriel remained in Middle-earth with Celeborn.

Celeborn and Galadriel probably lived for a time in Lindon, a coastal region west of the Blue Mountains. Gil-galad was the High King of the Elves who dwelled in Lindon. However, many of the Elves in Harlindon - the part of Lindon south of the Gulf of Lune - were Sindarin Elves like Celeborn, and he may have ruled a fiefdom there under Gil-galad.

At some time early in the Second Age, Celeborn and Galadriel are said to have moved eastward into Eriador with a number of Elves in their following. They may have lived for a while near Lake Evendim. Their daughter Celebrían was born at around this time. They began to move eastward again around the year SA 700 because Galadriel sensed a growing evil in Middle-earth that she felt duty-bound to oppose.

The realm of Eregion was founded in SA 750, and Galadriel and Celeborn are said to have dwelled there for a time along with Celebrimbor and the Elven-smiths. The Elves of Eregion had dealings with the Dwarves of Khazad-dûm nearby, but Celeborn still distrusted Dwarves and would not enter Khazad-dûm, although the Dwarves there had nothing to do with the destruction of Doriath.

The Elves of Eregion also had contact with the Elves of Lothlórien on the other side of the Misty Mountains. According to one story, Galadriel went to dwell in Lothlórien around SA 1350 to SA 1400 while Celeborn remained in Eregion. However, in other versions of the story both Galadriel and Celeborn stayed in Eregion.

Sauron came to Eregion in a fair disguise as Annatar the "Lord of gifts" in SA 1200 and deceived the Elven-smiths, who began forging the Rings of Power under his instruction in SA 1500. Sauron forged the One Ring to rule the others around SA 1600, and Celebrimbor hid from him the Three Elven Rings of Power that he had made without Sauron's knowledge. Enraged, Sauron attacked Eregion in SA 1697.

Celeborn led a sortie from Eregion to meet the vanguard of Sauron's army. He was able to drive the enemy back long enough to join forces with Elrond, who brought reinforcements from Lindon. But Sauron's army was greater than their combined forces and Eregion soon fell. Celebrimbor was killed, and Sauron took the Nine Rings and at least six of the Seven rings. Sauron would eventually be driven back to Mordor in SA 1701 with the aid of the Númenóreans.

The movements of Celeborn and Galadriel after the fall of Eregion are unclear. Celeborn may have gone to Lothlórien to help strengthen their defenses against Sauron. He and Galadriel may have lived there for a time, but they did not become the rulers of Lothlórien then. The king of Lothlórien at that time was Amdír, who was killed in the War of the Last Alliance at the end of the Second Age and was succeeded by his son Amroth.[4]

Celeborn and Galadriel may have lived for a while in Rivendell, the home of Elrond. At some point, they may have travelled to the coastal region of Belfalas in the south to be near the sea.

Celeborn and Galadriel's daughter Celebrían married Elrond in TA 109. Elrond and Celebrían had three children: twin sons Elladan and Elrohir, born in TA 130, and a daughter, Arwen, born in TA 241.

Around TA 1050, the Necromancer, who was actually Sauron, built the stronghold of Dol Guldur across the Anduin from Lothlórien. Celeborn and Galadriel are said to have returned to Lothlórien to investigate the Necromancer and ensure the safety of Lothlórien. But after a time, they once again departed, possibly for Rivendell. Lothlórien remained under the rule of King Amroth.

A Balrog awoke in Khazad-dûm in TA 1980. Many of the Elves of Lothlórien fled, including Amroth's lover Nimrodel. Amroth followed Nimrodel and he later perished at sea. Lothlórien was left without a leader, so Celeborn and Galadriel returned there and became the Lord and Lady of Lothlórien in TA 1981. They ruled the realm from Caras Galadhon, the City of the Trees.

Celebrían was on her way to Lothlórien to visit her parents in TA 2509 when she was captured by Orcs on the Pass of Caradhras. Her sons Elladan and Elrohir rescued her, but the horror of the experience remained with Celebrían and she decided to leave Middle-earth the next year to dwell in the Undying Lands.

In TA 2941, Sauron was driven out of Dol Guldur by the White Council - of which Galadriel was a member. However, Sauron had been prepared for the attack and returned to Mordor. He sent three Nazgûl led by Khamûl to reoccupy Dol Guldur in TA 2951.

Aragorn came to Lothlórien in TA 2980 and was betrothed to Arwen, who was there visiting her grandparents.

Celeborn at first welcomed Gimli despite his distrust of Dwarves and said he hoped that there could be friendship between their peoples once more. Then he learned that the Balrog had been disturbed by an expedition of Dwarves to Khazad-dûm led by Balin several years before, and that the Balrog had attacked the Fellowship resulting in the loss of Gandalf the Grey. Celeborn was angry at first and regretted allowing the Fellowship to enter Lothlórien, but Galadriel soothed him and he apologized to Gimli.[5]

Celeborn promised to help the Fellowship in any way he could. On the eve of the Fellowship's departure from Lothlórien, he discussed what route they might take, and offered them boats to ease their journey down the Anduin. The next day on February 16, Celeborn and Galadriel prepared a feast for the Fellowship and gave them gifts. Celeborn gave them further advice about navigating the Great River Anduin.[6]

On April 6, Celeborn met Thranduil, the King of the Woodland Realm, in Mirkwood. They renamed the forest the Wood of Greenleaves. Thranduil retained kingship of the northern part of the forest, while the center part was given to the Beornings and the Woodmen. Celeborn claimed the southern part of the forest below the Narrows of the Forest to be part of Lothlórien. This region was named East Lórien.

When Celeborn and Galadriel parted from Aragorn, Celeborn said to his granddaughter's husband: "Kinsman, farewell! May your doom be other than mine, and your treasure remain with you to the end!"[7]

Celeborn may have been anticipating the day when his own wife would depart for the Undying Lands while he remained in Middle-earth. On September 13, Celeborn and Galadriel crossed the Redhorn Gate to return to Lothlórien.

Galadriel left Middle-earth to return to the Undying Lands in 3021 at the end of the Third Age. Celeborn remained in Lothlórien, but after a few years he began to grow weary. He went to Rivendell to live with his grandsons Elladan and Elrohir for a while in the early part of the Fourth Age. Eventually, Celeborn went to the Grey Havens and sailed for the Undying Lands where his wife and daughter dwelled. It is said that "with him went the last living memory of the Elder Days in Middle-earth."[8]

The name Celeborn means "Silver tree", from the Sindarin words celeb ("silver") and orn ("tree").[9] His original name was Teleporno, a Telerin name which means "Silver-high", from Quenya, tyelpe ("silver").[10]

Celeborn was portrayed by Marton Csokas in The Lord of the Rings: The Fellowship of the Ring, directed by Peter Jackson, but his scenes in The Two Towers were cut for running time purposes. He briefly appears at the end of The Return of the King before the Elven boat departs from the Grey Havens.

In Ralph Bakshi's version of The Lord of the Rings, Celeborn is briefly seen with Galadriel greeting the Fellowship of the Ring on arrival. He was voiced by an unknown actor.

Celeborn appears in The Lord of the Rings Online. During an extended flashback depicting the War of the Last Alliance, Celeborn can be found in Echad-in-Edhil in Mordor next to Amroth, Lord of Lórien. After the War's end, Celeborn spends the early years of the Third Age hunting down Shelob in Ephel Dúath and eventually is able to trap her by placing Lights of Eärendil at the exits of Shelob's Lair, trapping her inside for many centuries.

During the War of the Ring, Celeborn can be found next to Galadriel on a main talan in Caras Galadhon, from where he negotiates with the Dwarves of the Iron Garrison, sends the player to combat the ancient evil in the depths of Moria and organizes a military assault against Dol Guldur in Mirkwood. After the fall of the Dark Tower, Celeborn meets with Thranduil to rename Mirkwood Eryn Lasgalen and give the middle section of it to the Woodmen. Celeborn and Galadriel then travel to Minas Tirith to attend the Great Wedding of Aragorn and Arwen, after which Celeborn ventures into the Morgul Vale once again to finish Shelob for good and leads a group including Legolas, Mablung and the player inside her Lair, Torech Ungol. 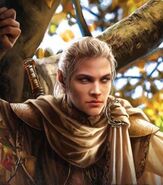 Celeborn from The Lord of the Rings: The Card Game - The Dunland Trap Adventure Pack

Celeborn from The Lord of the Rings: The Card Game - Attack on Dol Guldur Standalone Scenario