The One Wiki to Rule Them All
Register
Don't have an account?
Sign In
Advertisement
in: Sindarin words, Kingdoms of Men, Arnor, Eriador
English

Southern Eriador; south of the Great East Road between the Brandywine and Greyflood

Cardolan was a realm once part of the Dúnedain kingdom of Arnor. After the death of Arnor's tenth king, Eärendur, his sons divided the kingdom into three parts: Arthedain, Rhudaur, and Cardolan.

The borders of Cardolan extended from the river Brandywine to the west, the river Hoarwell to the east and the river Greyflood to the east and south. Its northern border was the Great East Road, but Cardolan also claimed the Arthedain-controlled Weather Hills, which contained the fortress of Weathertop and its valuable Palantír. For this reason the Weather Hills were claimed by all three kingdoms - Arthedain, Cardolan and Rhudaur of the former Arnor. This territorial dispute continued until Rhudaur became a vassal of Angmar after the line of the Dúnedain kings failed there.

When the kingdom of Angmar arose in northern Eriador, Cardolan allied with Arthedain and accepted the overlordship of Argeleb I. For over fifty years between TA 1356 and TA 1409 Cardolan aided Arthedain in holding back the forces of Angmar. However in that latter year Angmar invaded in strength and the Kingdom of Cardolan was destroyed. The remaining people became entrenched in the hill region, Tyrn Gorthad (the Barrow-downs). Arthedain could provide little aid, as it was itself under attack.

Cardolan was badly afflicted by the Great Plague, the population of Minhiriath was decimated, and the remaining Dúnedain inhabitants of the Barrow-downs perished, allowing evil spirits, the Barrow-wights, to inhabit the region. Arthedain managed to reconquer the land briefly in the 19th century, but few people wished to live there on account of the Barrow-wights, and so Cardolan was left unpopulated.[1]

After the final fall of Arnor, and the destruction of Angmar at the Battle of Fornost, Cardolan presumably remained unpopulated save for the city of Tharbad. This was abandoned and fell into ruin in TA 2912 in the great floods following the Fell Winter. Only long after this was the land was resettled with the reestablishment of the northern kingdom under King Aragorn II Elessar, at the end of the Third Age.[2]

The name Cardolan may have been dialect Sindarin for 'Red hill land', though J.R.R. Tolkien never specified the name's meaning. 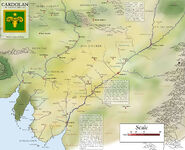 A non-canonical map of Cardolan