Paul Frees, in the 1977 Rankin/Bass version of 'The Hobbit'

Bombur was a Dwarf who accompanied Thorin Oakenshield and Bilbo Baggins on their journey to the Lonely Mountain as part of the company, alongside his brother Bofur and cousin Bifur. Bombur was noted as the fattest Dwarf in the company.

Bombur's parentage is unknown. He is the brother of Bofur and cousin of Bifur. Bombur was not of Durin's line, although he was descended from the Dwarves of Moria. His birth date is unknown, though it fell somewhere between TA 2763 and TA 2859; the brothers Fíli and Kíli were the youngest of the thirteen "by some fifty years," and, after Thorin was captured, Balin was "the eldest left." Fíli was born in TA 2859, and Balin was born in TA 2763. Bombur was thus roughly 150 years old during the quest. Prior to the journey, Bombur likely resided in the Blue Mountains alongside Thorin, after the loss of Thráin II.

Journey to the Lonely Mountain

Bombur was the twelfth Dwarf arriving at Bag End to attend the meeting arranged by Gandalf, where the quest to reclaim Erebor began. Because he was commonly considered to count for two dwarves due to his girth, he was the last to arrive at Beorn's house and the last to cross the Enchanted stream in Mirkwood. Bombur tumbled with Bifur and Bofur onto Thorin when they first entered Bag End. He chose to stay and guard the camp and supplies while the others moved up the Lonely Mountain, because he trusted neither mountain paths nor ropes to stay intact under his weight. However, he was later forced to use the ropes to escape the rampaging dragon Smaug before he could be slain.

Bombur was often asleep during the Quest of Erebor. When he was violently knocked into the Mirkwood River by an aggressive stag, he fell under a spell which caused him to sleep for several days, burdening the others with his weight as they traveled. Later Bombur awoke up, but diffrent. Bombur was forget every adventures during their journey. ( Only remembers feast in Bilbo's home). Once they arrived at the Lonely Mountain, he was assigned a midnight watch. Bilbo promised to keep watch to allow Bombur to rest. He then snuck the Arkenstone out of the mountain and delivered it to the Elvenking and Bard the Bowman. Incidentally, Bombur was also asleep when they opened the barrel in which he escaped from the Elves of Mirkwood. He was also asleep when Bilbo discovered the secret entrance to Lonely Mountain. Bombur was often last in line in the company during the quest. When the Dwarves, Gandalf, and Bilbo met the skin-changer Beorn, Bombur came last, at the request of Gandalf, and only after Bifur and Bofur left him behind to enter Beorn's house themselves. He fought and survived along with most of the company at the Battle of the Five Armies. After the defeat of Smaug, Bombur received his share of the treasure and remained at the Lonely Mountain until the end of his days.

In The Lord of the Rings, many years later while in Rivendell, Frodo Baggins learned from Glóin that Bombur had grown so fat it that it now took several Dwarves simply to lift him from his couch to the dinner table. It is unknown if Bombur fought in the Battle of Dale during the War of the Ring.

According to The History of The Hobbit by John D. Rateliff, in the never-completed third revision of The Hobbit, Bombur, along with Bifur and Bofur, was to become an honour-guard of sorts to Thorin. Such a change finds some evidentiary support in the book; Bifur, Bofur and Bombur all arrive at Bag End at the same time as Thorin, and they also climb up the same tree when the company is attacked by Wargs and Goblins.

In Peter Jackson's live-action The Hobbit films, he was portrayed by Stephen Hunter. In 2012, the studio released the following statement about Bombur in the upcoming trilogy:

Brother to Bofur and cousin to Bifur, Bombur is the chief cook amongst The Company of Dwarves. His immense size and voracious appetite causes frequent problems – and laughter – for himself and The Traveling Party. Despite his size he can be surprisingly effective as a fighter – and woe betide anyone who makes him late for dinner!

Unlike in the book, Bombur appears less frequently and has virtually no dialogue in the films other than grunts or retorts. In the extended edition of the third film, he speaks after the axe in Bifur's head is removed. Throughout the films he is largely a source of comic relief, most of which pertains to his size and love of eating; such as catching food in midair, being able to outrun his fellow Dwarves despite his girth, exceptional fighting skills, and breaking a table under his own weight with the addition of merely an ounce of food in his hand.

Bombur in the 1977 animated film

Bombur in The Hobbit films 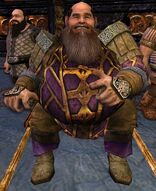 Retrieved from "https://lotr.fandom.com/wiki/Bombur?oldid=262606"
Community content is available under CC-BY-SA unless otherwise noted.