The One Wiki to Rule Them All
Register
Don't have an account?
Sign In
Advertisement
in: Men of Bree, Villains, Agents of Saruman,
and 3 more
English

Bill Ferny was a Man of Bree and a known agent of Saruman before and during the War of the Ring.

Bill Ferny resided in Bree and was known as an sneering, nefarious character who would sell anything to anyone, including dealings with shady travelers from the South, the agents of Saruman and Sauron. Ferny lived near the South-gate of Bree.[1]

In Bree, Merry saw Ferny selling information about the hobbits to the Nazgûl. Ferny may have also let loose the ponies that otherwise could have been used by the hobbits to leave the town. As a further bit of profit (and ignoring any loyalty to Saruman or the Black Riders), he sold a pony named Bill to Aragorn and the Hobbits, for which he demanded twelve silver pennies, over three times its value.[1]

Later, he supported Saruman's mechanization of the Shire, becoming a watchman at the Brandywine Bridge. Bill (the pony) repaid his former master for his mistreatment by kicking him. Ferny's ultimate fate is unknown, but as far as the folk of the Shire knew he was never heard from again.[2]

Ferny is also featured in The Lord of the Rings: The Fellowship of the Ring (video game), in which he is killed confronting Strider in the streets.

Bill Ferny was featured as a character in The Lord of the Rings Trading Card Game as a card called Bill Ferny, Swarthy Sneering Fellow.[3]

Ferny appears in The Lord of the Rings Online video game, spreading mischief in and around Bree. Early on, he is revealed to be in league with a band of brigands in the service of "Sharkey" (Saruman) that operate all over Bree-land. It is shown that he is intent in supporting an alliance between the brigands and some Orcs of the Misty Mountains, undoubtedly serving himself the most. He believes that such arrangement would allow him to pillage and plunder easier, hence his interest in it. Much to his chagrin, however, the alliance isn't forged.

In The Hobbit: The Desolation of Smaug, Ferny's father appeared as an assassin hired by Azog along with his partner Squint to hunt down Thorin II Oakenshield. 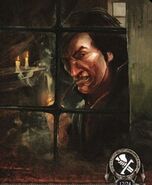 Bill Ferny from The Lord of the Rings: The Card Game, The Black Riders expansion

Bill Ferny from The Lord of the Rings: The Card Game, Murder at the Prancing Pony standalone scenario