Bifur, along with his cousins Bofur and Bombur, was a companion to Bilbo Baggins and Thorin Oakenshield on the quest of the Lonely Mountain. His parents are unknown, and most of his familial relations are unclear.

Bifur, a descendant of the Dwarves of Khazad-dûm, but was not of Durin's Folk. He and his family were driven out of their home in the Lonely Mountain by the Dragon Smaug. Forced to live in exile, the Dwarf warrior worked as a toy maker. Following Thorin II Oakenshield to a new life in the Blue Mountains, he continued his life as a toy maker.

Answering Thorin Oakenshield's Quest of Erebor, he went to the meeting at Bag End with his cousins Bofur and Bombur, where he played the clarinet. On the quest, he was nearly cooked on a spit by trolls and nearly killed by Orcs, Wargs, Stone giants, Goblins, Giant Spiders and Smaug himself. A valiant warrior, Bifur never gave up, but fought on with his boar spear and knives, and wards, killing numerous enemies. He fought at and survived the Battle of the Five Armies. Following the defeat of Smaug, Dain II Ironfoot gave him his share of the treasure and he remained to live at the Lonely Mountain.[2]

Bifur was played by Brian Haines in The Hobbit (1968 radio series). Bifur is played by William Kircher in Peter Jackson's Hobbit films. The studio released the following statement about Bifur:

Born in the West, Bifur has the rusting remains of an Orc axe embedded in his forehead, which has rendered him inarticulate and occasionally feisty! He communicates only​ with Khuzdul and hand gestures. Unlike most of the others in The Company of Dwarves, Bifur is not related to Thorin, nor is he of noble lineage, but rather is descended from miners and smithies – simple folk with simple tastes.

In the earliest partial manuscript of The Hobbit, much of the dialog later assigned to a few of the Dwarves is more evenly distributed. In the opinion of John Rateliff (author of The History of The Hobbit), this streamlining strengthened the story through simplification, but at the cost of relegating some of the Dwarves to obscurity since they barely speak at all. Bifur is one of these "silenced" members of the company. The films expanded on the fact he was "silenced" by saying that an Orc axe imbedded in his skull left him inarticulate and only able to communicate in dawrfish and hand gestures, this was used to explain why he did not speak throughout the film. At the Battle of the Five Armies he headbutts an Orc, which results in the axe in his head being ripped out. This allows his speech to return.

According to The History of The Hobbit by John D. Rateliff, in the never completed third revision of The Hobbit, Bifur, along with Bofur and Bombur were to become something like an Honour-guard to Thorin. Such a change is already supported in several places of the book, including the fact that Bifur, Bofur and Bombur all arrive at Bag End at the same time as Thorin, and that they climb into the same tree as him when the company is attacked by Wargs and Goblins. 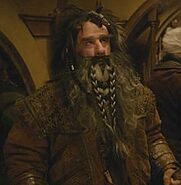 Bifur (right) in the animated movie - "The Hobbit"

Close up of Bifur's Boar Spear

Bifur from The Lord of the Rings Online 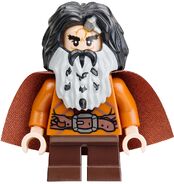 LEGO Bifur
Add a photo to this gallery

Retrieved from "https://lotr.fandom.com/wiki/Bifur?oldid=188997"
Community content is available under CC-BY-SA unless otherwise noted.