The One Wiki to Rule Them All
Register
Don't have an account?
Sign In
Advertisement
in: Sindarin words, Half-elven, Men of Gondor,
and 8 more
English

Lady of Rivendell,
Queen of the Reunited Kingdom

Half-elven (chose to be mortal)

Elves of Lindon,
Elves of Rivendell

"For I am the daughter of Elrond. I shall not go with him when he departs to the Havens: for mine is the choice of Lúthien, and as she so have I chosen, both the sweet and the bitter."
—The Return of the King, "Many Partings"

Arwen was the Half-elven daughter of Elrond and Celebrían. She was often called Arwen Undómiel or "Evenstar".

In marrying Aragorn II Elessar after the War of the Ring, she became Queen of the Reunited Kingdom of Arnor and Gondor, and like Beren and Lúthien before her, she united Elf and Man in peace, while becoming mortal.

Arwen was born in TA 241, to Lord Elrond and Lady Celebrían of Rivendell.[1] Like her father and brothers, she had the right to choose between immortality or mortal life. She lived most of her life in Rivendell and Lothlórien interchangeably.

During Aragorn's twentieth year, he met Arwen for the first time in Rivendell, where he lived under Elrond's protection. Arwen, then over 2700 years old, had recently returned to her father's home after living for a while with her grandmother Galadriel in Lórien. Aragorn fell in love with Arwen at first sight, and at first mistook her for Lúthien, thinking he had fallen into a dream.[4]

About thirty years later, the two were reunited in Lórien, where Arwen reciprocated Aragorn's love and they "plighted their troth" (promised themselves to each other) on the mound of Cerin Amroth, Arwen choosing to become mortal and to stay in Middle-earth with Aragorn, and giving up the chance to sail over the sea and live forever in the Blessed Realm. Nonetheless Elrond would not permit the two to marry until Aragorn had taken the thrones of Arnor and Gondor, the price for Arwen's abandonment of immortality. Arwen never broke faith with Aragorn, even when he went to war. While the War in the South raged on, Arwen wove a banner for Aragorn, which would become his standard after he became king.

Before taking the Paths of the Dead, Aragorn was met by the Grey Company, consisting of Rangers of the North, and Arwen's brothers, Elladan and Elrohir. They brought to him a banner of black cloth: the gift made by Arwen, and a sign that encouraged him to take the difficult path.[5] When the banner was unfurled at the Battle of the Pelennor Fields to reveal the emblem of Elendil in Mithril, gems, and gold, it was the first triumphant announcement of the King's return.

Arwen arrived at Minas Tirith after Aragorn had become King of Gondor and Arnor, and they married on Midsummer's Day in the year TA 3019, after the end of the War of the Ring. She became Queen of the Reunited Kingdom of Arnor and Gondor. After marrying Aragorn, she bestowed upon Frodo Baggins a gift; her place on the ships to Valinor. She bore Aragorn's son, Eldarion, and several unnamed daughters, some time in the Fourth Age.

In the year 121 of the Fourth Age, after Aragorn's death, Arwen died of a broken heart at Cerin Amroth in Lórien,[2] and was buried there one year after the death of Aragorn, to whom she had been wedded for 122 years. She was 2901 years old.

Arwen was described to be the most beautiful of the last generation of High Elves in Middle-earth, and was even said to bear a remarkable resemblance to her ancestress, Lúthien. Tolkien described Arwen as following:

In the middle of the table, against the woven cloths upon the wall, there was a chair under a canopy, and there sat a lady fair to look upon, and so like was she in form of womanhood to Elrond that Frodo guessed that she was one of his close kindred. Young she was and yet not so. The braids of her dark hair were touched by no frost, her white arms and clear face were flawless and smooth, and the light of stars was in her bright eyes, grey as a cloudless night; yet queenly she looked, and thought and knowledge were in her glance, as of one who has known many things that the years bring.
—The Fellowship of the Ring, "Many Meetings"

Arwen was a very distant relative of her husband Aragorn. Aragorn's ancestor, Elros Tar-Minyatur, the first King of Númenor, was her father Elrond's brother, who chose to live as a man rather than one of the Eldar. This means that Aragorn also has very distant Elvish ancestry. Elros died in SA 442, some 3240 years before Arwen was born.

Arwen eventually became Queen of the Reunited Kingdom of Arnor and Gondor when she married Aragorn, who was of the line of the Kings of Arnor.

After the War of the Ring ended, Arwen and Aragorn produced the future heir of the throne, Eldarion.

By Arwen and Aragorn's marriage, the long-sundered lines of the Half-elven were joined. Their union also served to unite and preserve the bloodlines of the Three Kings of the High Elves (Ingwë, Finwë, and the brothers Olwë and Elwë) as well as the only line with Maiarin blood through Arwen's great-great-great grandmother, Melian, Queen of Doriath, and also on Aragorn's side, through the line of kings of Arnor and Númenor to Elros, Elrond's brother, whose great-great-grandmother was also Melian.

The marriages between Elves and Men are in bold.
The half-elven or the Peredhil are in italic.

I would rather share one lifetime with you than face all the Ages of this world alone.
—Arwen to Aragorn in The Fellowship of the Ring (film)

She was not mentioned or featured in Ralph Bakshi's earlier film The Lord of the Rings.

In The Two Towers film, Arwen was originally supposed to appear with the host of Elves and fight at Helm's Deep alongside Aragorn. This was later cut from the film. 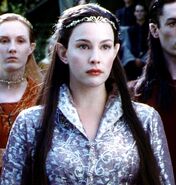 Arwen at the end of the Third Age

Arwen and Galadriel (portrayed by Liv Tyler and Cate Blanchett)

Arwen sewing Aragorn's banner of the White Tree of Gondor 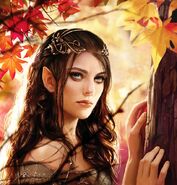 Arwen in the forest and also in The Lord of the Rings: The Card Game - The Watcher in the Water Adventure Pack 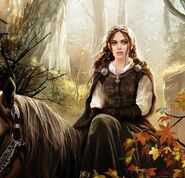 Arwen in The Lord of the Rings: The Card Game - The Redhorn Gate and Road to Rivendell Adventure Packs 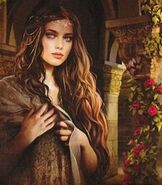 Arwen in The Lord of the Rings: The Card Game - The Dread Realm 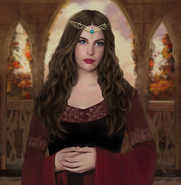