Agandaûr was one of Sauron's most trusted servants, and is the main antagonist of Snowblind's video game The Lord of the Rings: War in the North.

He is non-canonical, as he does not appear in J.R.R. Tolkien's writings.

Agandaûr was, like the Mouth of Sauron, a Black Númenórean. He was Sauron's lieutenant, though always ambitious and hungry for power. He was sent to the north to organize an army and conquer the Free Peoples on a different front.

He is first seen at Sarn Ford, an encampment of the Dúnedain Rangers. He arrives just after the Nazgûl have finished purging the Rangers, and meets with the Witch-king. He tells him he has stirred the Orcs of the mountains, and is gathering his forces at old Fornost. Before leaving, he says that the northern lands have known peace for too long, and that they will soon feel Sauron's wrath.

In Fornost, his Orc and goblin warriors are being cut down, and his war machines have been destroyed. In the city's citadel where he dwells, he tells his Orc chief Tharzog to deal with the intruders that are causing so much problems. He is chased to the citadel's top by Elladan and Elrohir, the twin sons of Elrond, the Half-elven. He duels the brothers and overpowers them, until their companions Andriel, Eradan, and Farin arrive. Outnumbered, Agandaûr flees on a Fellbeast. Despite being pursued by the Great Eagle Beleram, Agandaûr uses his sorcery to blast the Eagle with lightning, and he escapes.

Agandaûr takes no part in the gathering of Orcs in the Ettenmoors, but is mentioned as the one who corrupted the Stone-giant Bargrisar.

Agandaûr is also revealed by Radagast the wizard to be recruiting the dragon Úrgost of the Grey Mountains. Úrgost tells Agandaûr he will consider his offer on his own time. Before leaving, Agandaûr tells the dragon it would be wise not to defy Sauron, and that he'll leave behind some warriors just in case. Afterward, Agandaûr plots and unleashes an attack on the Dwarven stronghold of Nordinbad.

After the siege of Nordinbad, Eradan, Andriel and Farin head for Agandaûr's lair of Carn Dûm, the former capital of Angmar. Agandaûr battles the three heroes, and leads them to the bridge of the citadel. There, Agandaûr uses his mastery of sorcery to destroy the trio, but fails. As he dies, he asks for his master's help, though at the same moment, Frodo Baggins has destroyed the One Ring. Instead, he disintegrates and the only thing left is his helmet. With Agandaûr's death, Sauron's forces in the North are vanquished, and Angmar is all but destroyed.

Note: If player uses Beleram in the end, Agandaûr stabs him with his sword. This does nothing to affect the story; other than that Beleram doesn't appears in the ending. 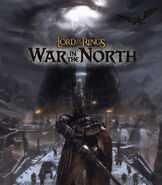