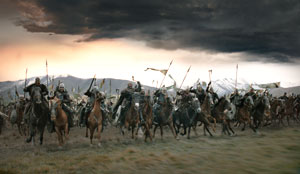 An "Éored" was a company of horseman of the Rohirrim.

It consisted of one-hundred and twenty mounted warriors,[1] and a full muster of the Éoreds of Rohan was called an Éoherë.[2][3]

In the War of the Ring, Éomer commanded one of several Éored involved in the Battle of the Pelennor Fields.

An Éored was a group of well-trained warriors who rode as a combat unit. Under the military reorganization in the time of King Folcwine, the size of a full Éored was determined to be at least 120 men. One Éored was one hundredth of the Éoherë - the full muster of Rohan. The Riders of an Éored could serve for a term or on a permanent basis. Each Éored was led by a captain. In times of war or unrest, the Marshals of the Mark each had a battle-ready Éored as part of his household which he could command at his discretion.

During the first three hundred years of Rohan's existence, the term was used widely to describe any significant number of Riders. Under King Folcwine, the military of Rohan was reordered. Under Folcwine, one Éored was made up of 120 riders including their captain. Each Éored was also supposed to comprise one-hundredth of the whole Muster of Rohan, not including the household of the King.[3]

The changes made by Folcwine continued through the time of the War of the Ring. While the force commanded by Théoden King son of Thengel at the Battle of the Pelennor Fields did not number much more than half of 12,000 riders,[citation needed] it was possibly the largest riding of the Rohirrim in history.

During the War of the Ring, Éomer, the Third Marshal of the Mark, defied orders and led his Éored in pursuit of a band of orcs who had entered Rohan from the Emyn Muil. In the battle between Éomer's men and the orcs, fifteen Riders were killed. Éomer's Éored thus numbered only 105 when they encountered Aragorn, Legolas, and Gimli on February 30, 3019.[4]

Merry Brandybuck and Éowyn, disguised as a Rider named Dernhelm, rode with the Éored commanded by Elfhelm to the Battle of the Pelennor Fields on March 15. When the Rohirrim charged onto the battlefield, Éomer led the first Éored in the center while Elfhelm's Éored was on the right flank and Grimbold's was on the left flank and the other companies followed behind. King Théoden rode before them all.[5]

After the War of the Ring, Éomer returned to Minas Tirith with an Éored of Rohan's fairest knights to escort the body of their slain King home for burial.

Retrieved from "https://lotr.fandom.com/wiki/%C3%89ored?oldid=248868"
Community content is available under CC-BY-SA unless otherwise noted.