The One Wiki to Rule Them All
Register
Don't have an account?
Sign In
Advertisement
in: Articles needing references, Rohirrim, Kings of Rohan,
and 4 more
English

Third Marshal of the Riddermark,
Lord of the Mark,
King of Rohan

"Now is the hour! Riders of Rohan! Oaths you have taken, now fulfill them all, to lord and land!"
—Éomer at Dunharrow before the Ride of the Rohirrim

Éomer Éadig was a Man of Rohan and the eventual eighteenth King of Rohan, and first of the Third Line of their Kings. In the last decade of the Third Age, Éomer was the Third Marshal of the Mark.

Éomer, born in TA 2991, of the House of Eorl, was the son of Éomund, a descendant of Éofor, and of Théodwyn, sister of King Théoden. In TA 3002, when Éomer was eleven, Éomund was slain in battle with Orcs. Théodwyn died of grief shortly afterward. Éomund also had a daughter named Éowyn, Éomer's sister. After they were orphaned Théoden adopted them as his own children.

Éomer became the third Marshal of the Mark, and was a strong leader of Men. He was honored highly and trusted by the King, and was close with his cousin Théodred, son of Théoden who loved him like a brother.

His Éored hunted down the Uruk-hai that had taken Meriadoc Brandybuck and Peregrin Took as they camped near Fangorn Forest, slaying them all. He never saw the Hobbits, as they had fled during the battle. Afterwards he met Aragorn, Gimli, and Legolas on the plains of Rohan, and he lent them two horses, Arod and Hasufel.

Éomer returned to Edoras and reported meeting the Ranger and his friends and allowing them to go free, a violation of the King's law. Under the poisonous advice of Gríma Wormtongue, he was imprisoned by Théoden, who had grown weak, aged, and suspicious under Saruman the White's influence.

After Aragorn, Gimli, and Legolas reunited with Gandalf, the four hastened to Edoras, where Gandalf broke Saruman's influence over Théoden and restored him to health and vitality. Théoden freed Éomer, who offered his sword to Théoden in token of his loyalty. Théoden named Éomer his heir prior to riding away from Edoras to the defense of the Hornburg.

At the Battle of the Hornburg, Éomer was involved in was the defence of the gate where he, Aragorn, and a small band of men left through a postern door at the side of the Hornburg and led an assault on the forces attempting to break the gates of the Hornburg. After this attack Éomer and Aragorn attempted to return through the door when Éomer was jumped upon by several Orcs who had laid low during the assault, though Éomer was saved by Gimli, who had secretly followed him out to the gate. When the Deeping Wall was breached, Éomer and Gimli were unable to reach the fortress and instead retreated up Helm's Deep to the Glittering Caves, where they held the Orcs at bay.

Afterwards he rode with Théoden, Aragorn, and Gandalf to Isengard, where they were greeted by Merry and Pippin, who were celebrating their recent victory. Treebeard and his fellow Ents, remained as well in order to guard the now imprisoned Saruman and Wormtongue.

After this, Éomer rode with Théoden to Dunharrow, where the Rohirrim were mustering. After receiving the Red Arrow, Théoden agreed to gather a force to help defend the city of Minas Tirith against the impending assault by Mordor. Théoden and Éomer rallied ten thousand men, leaving four thousand behind to guard Rohan before riding to the White City. The army of Rohan managed to arrive at the Pelennor Fields just as the Great Gate of Minas Tirith was breached. In the ensuing Battle of the Pelennor Fields Éomer fought gallantly, slaying many foes. But Théoden was fatally crushed by his horse, Snowmane, after being attacked by the Witch-king's fellbeast. Coming upon their corpses, Éomer was driven to temporary madness at seeing Éowyn, his sister, among the King's retinue, apparently dead, and charged in renewed fury at the forces of Mordor. He and Aragorn later met on the battlefield and reaffirmed their loyalty to each other, before returning to the long, grim work of winning the battle.

In the battle's aftermath, Éomer attended to Éowyn in the Houses of Healing, and, with Aragorn and Meriadoc Brandybuck, helped call his sister back to consciousness. Aragorn said that, as broken as Eowyn's heart had been over her unrequited love for Aragorn, her love for her brother was much more real to her, and a much more potent reason for her to live.

Éomer became King of the Mark upon Théoden's death, and attended the final council of war before the Battle of the Black Gate, where Gandalf counseled that the combined forces of Gondor and Rohan must throw a diversionary force of sufficient size against Mordor, with little chance of survival, let alone success, in the slender hope of distracting Sauron long enough to allow Frodo Baggins and Samwise Gamgee to cross Mordor in secret and deliver the One Ring to Mount Doom. Éomer confessed that he had little understanding of the "deep matters" being discussed, but he did not need it. For him it was enough that Aragorn and his allies had come to Rohan's aid at Helm's Deep, and therefore, Rohan would stand with Gondor in the last battle. Some riders under the command of Elfhelm remained in Minas Tirith as part of the garrison.

Following Sauron's fall, Éomer and his men went back to Edoras to attend to affairs of the kingdom, returning later to bear the body of Théoden back to his home for burial, where Éomer was formally crowned as King.

Éomer renewed the Oath of Eorl with Aragorn after the latter had been crowned King Elessar of the Reunited Kingdom, swearing everlasting friendship between Rohan and Gondor (and legalizing Cirion's grant of Calenardhon to the Éothéod.)

He became known as Éomer Éadig, or "the Blessed", because during his reign Rohan recovered from the hurts of the War and became a rich and fruitful land again. Although Sauron was defeated, the West was never wholly free of enemies, and Elessar and Éomer rode together to war many times.

Éomer had met Lothíriel, daughter of Prince Imrahil of Dol Amroth during his stay in Gondor, and they were wed. She bore him a son Elfwine, who succeeded his father, after Éomer's death in the year FO 63.

Éomer means "one who is famous in terms of horses" in Old English. The idea for his name was derived from the Anglo-Saxon words eoh ('war-horse') and maer ('famous') - his epithet éadig is a word meaning 'blessed'.

Éomer appears in Ralph Bakshi's 1978 animated version of The Lord of the Rings. He has no spoken dialogue. Éomer first appears attacking Uglúk's Orcs. Théoden later mentions him by name in a conversation with Gandalf. Éomer then appears at the end of the film, during the battle at Helm's Deep.

Rankin/Bass's Return of the King

In the 1980 animated film The Return of the King, an unnamed character is seen at the last debate, riding with Aragorn and Gandalf to The Black Gate, and finally riding behind Aragorn during his Coronation procession. It is speculate that this character is Éomer as he wears Rohirrim armor similar to King Théoden's.

Lord of the Rings trilogy

In the Lord of the Rings film trilogy by Peter Jackson, Éomer is exiled by Gríma Wormtongue before meeting Aragorn, and is an outcast until he arrives at Helm's Deep, summoned by Gandalf. In this sense, his character has been combined with the character of Erkenbrand, who, in the book, is the one with whom Gandalf returns to Helm's Deep. At the Battle of the Pelennor Fields in the third film, Éomer kills the Chief of the Mûmakil riders. Éomer was played by New Zealand actor Karl Urban.

In The Lord of the Rings Online Éomer is first met in the town of Eaworth in the Entwash Vale where his riders make a brief stop shortly after meeting with the Three Hunters. Obligated to bring the player and their companions before the King, he takes them with his Éored on their way to Edoras. After learning that Reeve Fastred of Snowbourn has ignored his order to bring his people into Westemnet across the Entwash, he decides to bring the matter to the King directly. However, he is instead stripped of rank and imprisoned by Gríma Wormtongue while the player and their companions are banished from Westemnet. After Théoden is released from Wormtongue's spell, Éomer rides towards the Fords of Isen at his side.

Lego: Lord of the Rings

Éomer also appears as a character in LEGO The Lord of the Rings.

"Strider is too poor a name, son of Arathorn. Wingfoot I name you. This deed of the three friends should be sung in many a hall."
—Éomer talking to Aragorn about the speed at which they hunted the Uruk-hai

"It shall be so. Legolas upon my left, and Aragorn upon my right, and none will dare to stand before us."
—Éomer speaking to Gimli before leaving Edoras

"He walks here and there, they say, as an old man hooded and cloaked, very much like to Gandalf, as many now recall."
—Éomer describing Saruman

"I thank you, Gimli son of Glóin! I did not know that you were with us in the sortie. But oft the unbidden guest proves the best company."
—Éomer thanking Gimli after the attack on the Hornburg gates

Éomer in shock at the sight of the Mûmakil 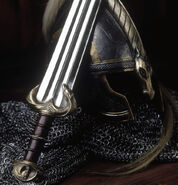 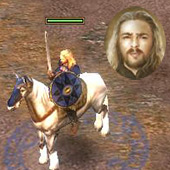 Éomer in The Lord of the Rings: The Battle for Middle-earth 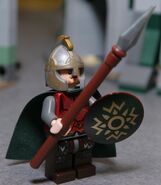 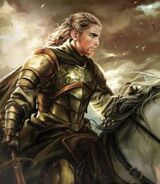 Éomer in The Lord of the Rings: The Card Game - The Voice of Isengard Expansion 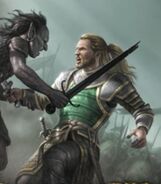 Éomer in The Lord of the Rings: The Card Game - The Mountain of Fire Expansion